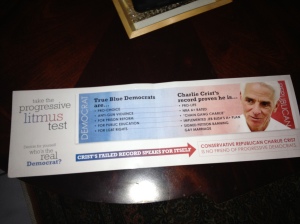 A mysterious group referring to itself as “Progressive Choice” has created a stir among Democrats both in Tallahassee and other parts of the state the past two weeks. The group who have a Facebook page which vaguely shows support for various ideas on the left of the ideological spectrum has mailed a nasty piece about Governor Charlie Crist’s record to Democrats throughout the state. The piece which hits Crist for his past positions on issues (yet has no citations  or attribution whatsoever when they refer to Crist as “pro-life” or responsible for “implementing Jeb Bush’s A+ plan”) contrasts this with the “True-Blue Democrats” position.

For several days we have been speaking to folks around the state who have personal suspicions as to who is responsible for funding this group. Many actual progressive leaders of note in  the state of Florida have been asking questions among one another about this organization.

We would love to believe that “Progressive Choice” is a grassroots group of liberal activists as they claim. The Facebook page for the groups states that,

Progressive Choice Florida is a diverse coalition of fair-minded, forward-thinking individuals and organizations advocating for Florida leadership that stands firm on progressive principles and genuinely represent the interests of women and working families.

However, for me personally as a veteran of many election cycles, I have seen many organizations funded by Republicans or GOP leaning business interests try and play in Democratic Primaries. Sometimes these types of groups are successful. In 2002, Republican oriented business groups essentially won a Democratic Primary for statewide office with heavy spending in the Agriculture Commissioner race. This mail piece looks very similar to those pieces that were run against Everglades activist Mary Barley, a  recent party switcher who would have been far and away the most formidable Democratic nominee in that race.

In fairness, this is not only a Republican trick. Democrats have played at times a similar game forming groups which often have the term “conservative” in them and dumping money and sometimes misleading information into a media oriented campaign. Republican primaries throughout the country have been impacted by the game playing of Democratic funded organizations.

Of course it is possible that “Progressive Choice” is in fact a grassroots organization that has raised money for a statewide mailer which provides key information for Democratic voters to ponder about Governor Crist’s record. The other positions the group are advocating such as public school choice and more education funding are non-controversial among Democratic voters. Still, as has been speculated about in political circles for about a week now, the group appears to simply be an anti-Crist front.