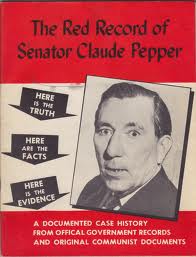 While most modern historians and political activists would point to November 7, 2000 as the most significant election in Florida’s history as far as national implications, it can be strongly argued the most important election in the state’s history as far as impacting national politics was on May 5, 1950. The 1950 US Senate Democratic Primary in Florida was the political campaign most responsible in many people’s eyes for ushering in the era of McCarthyism.

Florida much like other southern states in the early part of the century had an inherent conflict between business and populism. Florida was the boom state of the 1920s but after the land bust, stock market crash and onset Great Depression a liberal New Deal hero emerged -Claude Pepper.

Pepper rose in the 1920s as well and when he was elected to the US Senate in the 1930s became among the nation’s leading liberals. In fact, during the 1940 election no liberal Senator was more in demand on the stump throughout the nation than Claude Pepper. Pepper was the quintessential New Dealer, remaining steadfastly loyal to President Roosevelt while most southerners drifted towards Senator Josiah Bailey’s (D-NC) “conservative coalition” of southern Democrats and Midwestern/Western Republicans.

James C. Clark’s book  Red Pepper and Gorgeous George: Claude Pepper’s Epic Defeat in the 1950 Democratic Primary (Florida Government and Politics) develops Pepper’s biography by pointing out despite the liberal heroism of Pepper he was deeply flawed. While the Florida Senator was an early advocate of Lend-Lease and one of the few vocal members of Congress regarding the Nazi threat in 1938 and 1939, his softness of the Soviet Union was unlike any other member of Congress post World War II. Pepper spent time in Joseph Stalin’s company, wrote a pamphlet entitled “The Conspiracy Against Russia” and spent much of 1946 defending the Soviets across the United States.

Pepper’s growing leftist tendencies alienated him from the mainstream of the Democratic Party and fueled a quixotic run for the Presidency in 1948.  His desire to be a national candidate was not only undermined by his naivety about the Soviet Union but his record on race issues which was like any other Southern Democrat in the Senate. Clark consistently brings the race issue into the narrative about Pepper perhaps unfairly as every elected Southern Democrat of that era was extreme on the issue. However, Pepper’s liberalism which did bring him in contact with radical African-Americans in the north from time to time was used against him in the 1950 Democratic Primary.

In 1950 Congressman George Smathers (D-Miami) defeated Senator Pepper in the Democratic Primary for US Senate. Smathers campaign was the first modern media campaign in Florida’s history and developed themes mimicked later that year by his friend Richard Nixon and in the future by Barry Goldwater among others. The use of the communist card against Pepper helped usher in the era of McCarthyism.

Pepper had made things easy for Smathers with his comments about the Soviet Union and the publication of articles such as the Saturday Evening Post’s infamous “Pink Pepper” story in 1946. Pepper received almost universally negative media coverage nationally and in Florida, which opened the door for Smathers to use the communist card freely.

The man behind Smathers bid for the Senate was Ed Ball.

Ed Ball was the inheritor of the DuPont fortune and for all intents and purposes Florida represented in the 1920s the boom state or even the last frontier in America. Thus, Florida attracted all types of people, both wealthy industrialists like the DuPont’s and get rich quick schemers/land speculators.

In the 1940’s Ball was actively pushing his influence throughout the state, particularly in the legislature. But Pepper’s liberalism was threat to Ball’s control of the state which was becoming consolidating in the 1940s. Ball was a critic of the New Deal which he felt was little different than Joseph Stalin’s Soviet economic system and railed against FDR. Pepper of course was a strong ally of FDR and perhaps the American closest to Stalin for a period of time.

Ball ran Smathers in the 1950 Democratic Primary against Pepper and won, in perhaps the most negative campaign in the state’s history. Pepper’s advocacy of New Deal and Fair Deal programs as well as his echoing of Henry Wallace’s calls to engage the Soviet Union rather than create a Cold War left him susceptible to attack. Much like Wallace, Pepper would eventually move to the middle on foreign policy but in 1950 he was firmly anchored to the left in an era where McCarthyism was taking hold. Pepper was elected to the US House from Miami in 1962 and served until his death in 1989.

From the 1940s to the early 1960s Ball’s allies in the Pork Chop Gang enforced his economic agenda, benefiting his companies especially St Joe Paper Company which he founded in 1938 and is still the largest landowner in the panhandle. The Pork Chop Gang controlled the state, clashing with populist Governor Fuller Warren and later with Leroy Collins. These rural, conservative Democrats were a throwback to the pre-New Deal era “bourbons” that had run the state. The political philosophy of the Pork Chop gang was to maintain the interests of large landowners, keep as much state money in rural north Florida counties and to reject any attempt to weaken racial segregation.

Ball in adherence with his political allies and Florida law kept his mill strictly segregated into the 1960s. Ball continued to exert influence over the state into the late 1960s, but legislative reapportionment following the Baker v. Carr decision and the 1968 Constitution greatly diluted his influence.

Tracy Danese’s book on the rivalry of these two men is a must read for those interested in Florida Political History. Additionally, those truly interested in Ed Ball should visit the lodge at Wakulla Springs State Park, which Ball constructed in the late 1930s. The lodge hosted several historic events including the Southern Governors conference in 1948 where the “States Rights Democratic Party” aka Dixiecrats was first conceived as a protest to Harry Truman’s embrace of Civil Rights. On this Pepper initially supported Truman’s Civil Rights program owing to his national ambitions but once Florida reelection got threatened Pepper reversed course. As Clark points out, Florida was possibly the most violently racist southern state in the late 1940s and early 1950s. We’ve explored this topic before on this site, but it is important to remember large numbers of elected officials as well as the hierarchy of Florida’s ruling Democratic Party were in league with racists, sometimes violent racists.

Clark’s book on Pepper and Smathers is perhaps the most thorough and well-researched book ever written about an election in the state of Florida. While at times Davis seems to be highly critical of Pepper (perhaps to compensate for the heroism most historians have given him through the years), the narrative is a page-turner and his conclusions on the 1950 campaign are irrefutable. It like Danese’s work is highly recommended for anybody interested in Florida political history.