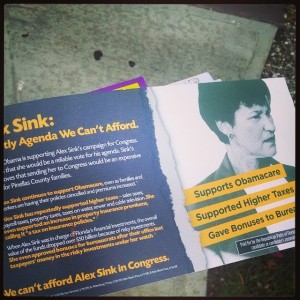 When  Congressman Bill Young (R-Indian Rocks Beach) passed away in October his Congressional seat looked like a prime pick up opportunity for the Democrats. Young had been in public office for fifty years and in Congress since 1970. The former Appropriations Chairman was long been one of the more moderate Republicans in the Florida Delegation and had focused extensively on local issues. For years, Democrats felt they could wait Young out or even defeat him since Pinellas County is one of the few places in the state where the party did develop a strong bench.

This seat has long been viewed as a prime pick-up opportunity for the Democrats. Pinellas County was the first Florida country to switch en masse to the Republicans thanks to the mass immigration of northerners post World War II. But since the early 1990s the county, particularly the southern portion has been trending towards the Democrats. Republicans still do well in some elections here but it is largely moderate Republicans  who win especially those who are to the left on environmental issues. That’s why the nomination of conservative David Jolly was thought to be suicidal for the GOP.

When Jolly won the GOP nomination for this special election in early January, the general consensus was that Democrat Alex Sink who benefited from a cleared field would win the election. Sink who has long resided in Hillsborough County does have Pinellas County ties through business and family. Jolly was in Washington DC for many years as a lobbyist and a member of Young’s staff. So in essence the race is being fought by two major party candidates who both could be labeled as “carpetbaggers” yet still have strong local ties and connections.

For the last month Republicans have been crowing about their opportunity to hold the seat. This came after Jolly’s primary win had seemingly undermined the chances for the GOP. Part of this is due to a very disciplined and focused media campaign coming from the Jolly campaign. But other factors have played a part.

From what multiple contacts tell me, the Sink campaign is not only faltering, but the candidate and campaign are consistently off message. It was obvious in the 2010 Gubernatorial race and even in her time as CFO that public speaking was not the candidates strong suit. But with a tightly focused message and more proactive thinking about the line of attack coming from the other side this could be mitigated. But that has not happened.

The Florida Democratic Party has released multiple staffers to work the campaign and state party vendors are part of the media effort. Complaints of lack of  message discipline in the campaign’s media effort and lack of targeting (for example spending lots of money saturating the Tampa/St Petersburg media market with broadcast TV ads in low turnout special election) has repeatedly come to the forefront. Another concern is that while the FDP has throw multiple staffers on the ground and much of the OFA network in the Tampa Bay area has been activated, enthusiasm for the candidate and campaign remain low. Perhaps that has to do with unfocused media and messaging efforts.

Dread is beginning to increase among Democratic insiders and activists in the Tampa Bay area. In what is likely to be difficult off-year election, an easy Sink victory would have been a major boost to the party’s prospects and psychology heading into the fall election season. Now facing a closer than expected victory or an outright defeat concern is growing that this race could be the harbinger of a big GOP year in Florida.

Next month’s Special Election still could go Sink’s way and represent a Democratic pickup in the US House. But a month ago it did not appear like it would be this difficult.