Air Florida is today remembered for one thing- the tragic Potomac River crash in January 1982 that killed 78 people both on the plane and on the 14th Street Bridge which the aircraft crashed into shortly after taking off from Washington National Airport.

In the late 1970s and early 1980s, Florida had its own international airline. While Eastern Airlines, at the time the largest airline in the “free” (ie. non-communist world) was based in Miami and featured extensive routes in and out of Florida, and Pan Am, the United States largest international carrier maintained its second largest domestic operation in Miami (behind New York-JFK) were the established players, upstart Air Florida built a large internal state network in addition to a large international operation. Air Florida’s destructive far war tactics helped further exacerbate problems at Eastern and Pan Am both of whom would collapse in the early 1990s, two of the three ever biggest  airline liquidations. In 1988, Eastern employed 15,000 people in south Florida, the largest private employer in the region. Pan Am was third with 7,000 jobs. All of these jobs were gone by December 1991, making the George Bush recession that much worse in southern Florida.

Air Florida had been around since 1971 flying internal routes within the state. However, after airline deregulation in 1978, expanding into Europe, Central America and the Caribbean.  Right after deregulation the entire route system was within the state of Florida with the exception of flights from Miami to the Bahamas and Virgin Islands as well as flights from West Palm Beach and Fort Lauderdale to New York and Washington D.C.

Air Florida routes in 1979 right after deregulation. Most routes are within the state of Florida with a few flights to major cities outside the state. The dotted lines on the route map indicate Air Florida’s proposed service to Dallas from Miami, Fort Lauderdale and Tampa.

By 1981 Air Florida had begun serving Europe and Central America from its Miami hub. The airline had also expanded out of state flying to include Tampa and Orlando to Toledo, New York and Washington and began service to Philadelphia from Fort Lauderdale.

By the time late 1982 rolled around Air Florida had more international destinations than American and United did at the time COMBINED. They had also begun service from Fort Lauderdale to the Bahamas and were planning to fly to Chile from Miami. The European network continued to expand as both Amsterdam and Brussels came online with flights from Miami.

Air Florida’s route structure was inconsistent starting service to many cities and discontinuing them quickly only to replace them with other cities. A joke at the time stated that the airline’s eccentric chairman Ed Acker had a dartboard map in his office and wherever the dart landed, the airline would commence service to. The airline also had developed a reputation for low fares and poor service.

In 1982 Air Florida began service to Shannon, Ireland from Miami and to Chairman Ed Acker’s home in Bermuda.

After the Potomac crash the airline continued to grow, adding cities while ending others at a frenzied pace.

Air Florida’s international network was impressive in 1983 but also entirely too large for an airline with little domestic feed into its Miami hub.

Air Florida scaled back on flights to the Northeast in 1983 maintaining flights only from Miami, Fort Lauderdale and West Palm Beach. All flights from Orlando and Tampa to points north were discontinued but new routes to the Midwest from Tampa and Orlando would be opened later in the year. 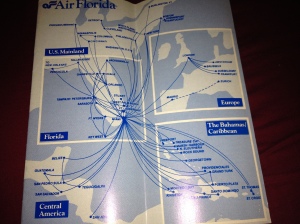 In 1984 Air Florida was flying all over the place yet was going broke. The airline at this time had the most European destinations of any US Airline other than Pan Am and TWA. Air Florida offered the first through flights from Miami to Zurich since National Airlines had been bought by Pan Am in 1980. Flights also began from Tampa and Orlando to the midwest.

Air Florida was so committed to the UK market they even sponsored Southampton F.C. The club was one of the top teams in English Football (Soccer) at the time.

By 1984 Air Florida has flamed out. Despite being one of the largest US international airlines, the company burned through cash and never maintained a consistent route structure or policy. Many of the planes were sold off to Southwest Airlines and Midway Airlines. Midway bought some of the assets of the company and continued to fly Miami to the Virgin Islands and Fort Lauderdale to the Bahamas service into the 1990s. When Midway went under in the early 1990s, the last remnant of Air Florida was dead.

← Zest of the Day: House Speaker Will Weatherford connected to Citizens contractor
Zest of the Day: The Political Hurricane on Allison Tant and the FDP with TFS Analysis →